Connectivity is the safety network for biodiversity conservation.

Across the globe, wildlife have less freedom to roam.  In an increasingly fragmented world where nature is segmented, land mammals are moving two to three times less.  With limited ability to migrate, to disperse, to mate, to feed and to thrive, wild animals are cornered into situations where the threat of extinction looms greater (Tucker et al. 2018).

We know fragmented nature is susceptible to a wide range of maladies from species extinction to the loss of critical ecosystem functions.  Fragmentation, the subdivision of habitat, impacts nature in three specific ways through a reduction of overall habitat area, increased isolation from other habitat patches and increased edge effect disturbance (Haddad et al. 2015). 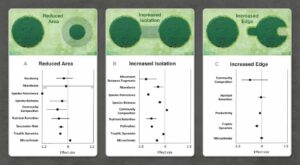 Fragmentation leads into a downward spiral of cascading ecological dysfuntions; one of the most notable is ecological debt – over time, fragmented habitat has reduced species richness and reduced nutrient cycling.  Stopping fragmentation by conserving large intact landscapes and seascapes through the designation of more and larger protected areas is an essential policy recourse; yet may not be feasible in the short term or at scales that ecology functions globally.

Is there any strategic conservation bridge to a more nature friendly future? Connectivity conservation is gaining recognition as a tried and true opportunity that can counteract many of the negative impacts of habitat fragmentation.  There is overwhelming science built on island biogeography research and species meta-populations studies that demonstrate that connected habitats are more effective habitats for saving species and ecological functions.  In a time of climate change where species are responding to rapidly changing environmental conditions, connectivity is also viewed as a viable method for climate adaptation.

Connectivity conservation embodies a continuum of ecological approaches that connects habitat patches.  Wildlife corridors are a widely accepted connectivity strategy that protects species migrations.  Corridors are often discrete linear movement areas for a defined set of focal species such as pronghorn antelope in North America or tigers is Asia.  Wildlife corridors come in an array of shapes and sizes depending on the species of concern ranging from linear trails to stepping stone habitat patches that serve migrating bird or marine species.  More often, connectivity is conserved through larger landscape or seascape linkage zones that serve a wide array of species and ecological processes.  Linkage zones are often large swathes of land or sea between protected areas. They are often used to conserve dispersal areas which is critical in places like East Africa, where an overwhelming majority of wildlife are found outside of protected areas.  At the largest scale, conservationists protect connectivity values in the human dominated regions outside of protected areas (also referred to as the conservation matrix) through permability areas that support seasonal or temporal species movement and/or ecological processes such as vernal pools or specific freshwater hydrologic flows. And as we recognize the impacts of climate chanage, scientists are advocating for the creation of climate corridors to conserve species movements along elevational temperature gradients or to serve as climate refugia.

While images of spectacular mammals migrations such as wildebeest inspire terrestrial thinking of wildlife corridors, aquatic connectivity within freshwater systems is often the lifeblood of ecological systems.  For instance, freshwater connectivity drives the ecological processes of the Amazon River basin, the largest river basin in the world, whose influence extends to regional and global climate patterns.   Over 400 dams threaten the connectivity of the Amazon; thus disrupting critical global carbon and hydrological cycles.  Recent research in more temperate regions show that gravel-bed river floodplains are the ecological lifeblood of mountain landscapes.  Often poorly protected, these free flowing systems are essential for maintaining both aquatic and terrestrial biodiversity connecting aquatic, avian, and terrestrial species from microbes to grizzly bears.

Within the marine realm, connectivity functions in a three dimensional way as the water column adds an additional variable to movement ecology. The sea itself is a connective medium.  Thus, marine connectivity is manifested in all sorts of fashion across marine-coastal connections, surface-benthic interactions, and as part of ocean current dynamics. It is almost impossible for Marine Protected Areas, the cornerstone for ocean conservation, to function as ecological isolates in this highly connected environment.  As such, the sea is conducive in creating ecological networks that connect critical habitat across space and time. Furthermore, the complex life histories of many marine species have evolved with the movement dynamics of this fluid world. Sea grasses and mangrove swamps are well known nursery habitats for juvenile life stages of many marine species which often need to travel to coral reefs, sea mounts and/or pelagic waters for adulthood.

At intercontinental levels, avian flyways have always captured society’s imagination of animal movement ecology.  Long distance migrations have long inspired poets, writers, film makers and policy makers. The Convention on Migratory Species was established specifically to protect avian, aquatic, and terrestrial migratory species that cross or go outside of national boundaries.  The Arctic Tern holds the record for the longest travel distance at 71,000 kilometers migrating from pole to pole each year.  There are recognized marine swimways that function very similar to flyways.  Iconic marine migrants are the Humpback whales who travel the furthest for any mammal at 22,000 kilometers annually. 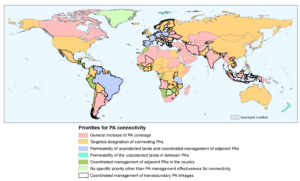 Main priorities for improving or sustaining the connectivity of protected areas in each country of the world ©EU, 2018

If the world seeks large scale conservation action rapidly, protected areas connected through ecological networks offers hope.  At present, there are over 500 large-scale, bottom-up stakeholder driven ecological networks that are advancing large landscape and seascape conservation around the world.  In North America, Yellowstone to Yukon Conservation Initiative is one of the most notable efforts that links over 700 protected areas across 3200 kilometers in the US and Canadian Rocky Mountains. Other well know efforts include the Coral Triangle marine network in the Pacific and the Terai Arc – Eastern Himalayan Landscape Initiative in Asia and the Albertine Rift Valley of Africa.  Ecological networks apply conservation practice at the scale nature functions.

At present, the world lacks a consistent approach to connectivity implementation.  What is the best evidence and what are the best practices to advance connectivity conservation? How do we create corridors, design ecological networks or measure the effectiveness of connectivity conservation efforts?  IUCN’s World Commission on Protected Areas’s Connectivity Conservation Specialist Group is attempting to build a global community of experts to address these questions and provide technical guidance on the best practices to achieve enduring connectivity goals.  The Specialist Group welcomes any technical support and capacity.

Ecology is the science of interdependence – All life is interconnected.  Connectivity is the core attribute of ecology.  Protected areas alone cannot save biodiversity or conserve the interconnected ecological functions that sustain life on the planet.  Humanity is now pushing the limits of planetary life-sustaining boundaries.  This saving nature is tantamount to saving humanity.  Connectivity conservation is one of our strategies that can protect keystone ecological processes from microcosmic to planetary levels.  Until the forces of fragmentation are erased, connectivity conservation by design creates a safety network for nature.

Learn more about the Center for Large Landscape Conservation here.