How are we going to save the planet? By dreaming crazy.

Ten years ago, National Geographic explorer-in-residence, Sylvia “Her Deepness” Earle, couldn’t have been more clear about her opinion of Nature Needs Half. “I have a serious problem with this plan,” she told Vance Martin, President of the WILD Foundation, immediately after the Nature Needs Half launch at the 9th World Wilderness Congress in Merída, Mexico “50% just isn’t enough.”

In the years leading up to the 9th World Wilderness Congress, two conservationists, Harvey Locke and Vance Martin, identified a narrowing  window of opportunity to halt the 6th mass extinction and restore our badly damaged relationship with Mother Nature. It may seem hard to believe now, in 2018, after E.O. Wilson’s book, Half Earth, and the dozens of other groups taking a stand for half, but in 2009, when it was first launched, this idea didn’t go over so well. In fact, it remains controversial to this day. Although many conservation leaders admitted to personally supporting the half goal, they believed that publicly aligning themselves with half would ruin their credibility.

To them, our goal was nothing more than a silly dream. 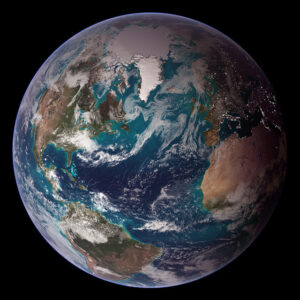 Fast forward 9 years to December 2018. Biologist and author, E.O. Wilson published his widely read book that calls for the protection of half the planet to save life on Earth.  Meanwhile, the Executive Secretary of the Convention on Biological Diversity (CBD), Cristiana Pasca Palmer, is calling for ambitious actions in advance of the 2020 CBD in Beijing, China. At the same time, many of the world’s most prestigious conservation organizations are in the process of creating a groundbreaking a “Global Deal for Nature.”

Most recently, the Leonardo DiCaprio Foundation has announced its “One Earth” initiative that includes the goal to “protect, connect, and restore 50% of our lands and seas.”

The idea of protecting 50% of the planet by 2050 may have once been a “laughable” dream advanced by only a few individuals in conservation, but it has quickly coalesced into a true movement. The idea no longer belongs to just one place, person, or organization. It is carried by a web of  organizations harnessing their work to this visionary goal. As we enter 2019, and the lead up to the 2020 CBD, we excitedly await to see who will be next in incorporating the target into their work.

But now, at the end of this momentous year for Nature Needs Half and the planet, it is time to reflect on how the world changes. Rarely do groups who play it safe ever revolutionize the world. It is those who dare to dream crazy and act boldly who see their visions realized.

So yes, Sylvia, you were absolutely correct. We agreed back then and we still agree now, the 50% protection is not enough but it sure is catching on and that’s the start that this planet critically needs. Little by little the world is being converted by crazy dreamers.